Find out what’s on in Dublin and start planning your weekend now!

Looking for some deadly electronic music to dance like there’s no tomorrow this weekend? Then check this out! The Wright Venue will be receiving Ferry Corsten, Mauro Picotto and Ben Nicky on Friday.

The Dutch DJ Ferry Corsten is well known for producing many pioneering trance tracks, but in recent years, he has shifted to a broader electronic music style, playing everything from progressive house to melodic trance. Ferry has seven full-length studio albums under his belt and multiple Gold records to his name with songs that include ‘Punk,’ ‘Out Of The Blue,’ ‘Rock Your Body Rock,’ and other world-class hits.

As the first Italian DJ to tour the world, Mauro Picotto has put his homeland on the global techno map. He became well known as a solo artist with songs including “Komodo (Save a Soul)“, “Pulsar”, “Iguana”, and “Lizard”. He has collaborated with other electronica/trance musicians such as Tiësto and Mario Più.

Ben Nicky has tattooed his mark on the scene to become one of the most sought-after, uplifting and psy trance DJs on the circuit. He has names like Armin Van Buuren, Tiesto and Gareth Emery as firm supporters of his sound.

If this excites you then run and book your ticket!

This Friday the London born and Berlin based DJ Dax J will be playing at Hangar. Dax J is known as a powerful DJ, producer and label boss. His trademark sound is on constant rotation from the biggest DJ’s in electronic music today.

In 2016 Dax was voted into Resident Advisor’s top 100 DJ’s of the year at No.56, while also being nominated in Mixmag, Groove Magazine and DJ Mag as Best Breakthrough DJ. He played closing sets at monumental parties including Awakenings for ADE in the Gashoulder as well as a 10-hour marathon set in the worlds most notorious techno club, Berghain.

Carnavália – At The Sugar Club

How about celebrating Carnival this saturday? ‘Carnavália’ is a late-night tropical carnival, dedicated to the cultural influences of Brazil.

From 8pm there will be a screening of the acclaimed Brazilian documentary Tropicália, followed by a live performance from one of Ireland’s best Brazilian samba bands – Morro 16. Disco É Cultura DJs Mick Twoc & Jeremy Murphy will be spinning Brazilian music with the Manma Saor residents. There will also be a Brazilian street BBQ and special deals on Cachaça and Caipirinhas (Brazilian drinks)!

The American electronic music producer and DJ Robert Hood is back in Dublin. He will be playing at District 8 this Friday. Robert is a founding member of group Underground Resistance as a ‘Minister Of Information’ with Mad Mike Banks and Jeff Mills and is often considered to be one of the founders of minimal techno.

The Parisian legend DJ Deep who is a master behind the decks will be joining Robert on the night.

Alexis Taylor will perform a Prince Tribute DJ set at The Button Factory this Saturday. So if you are a fan of Prince you can’t miss it!

The UK House and Techno producer/DJ Doc Daneeka takes over the Wah Wah Club on Friday. Having broken through in the blurred lines of 2010’s UK underground Melting pot, Daneeka has gone on to cement a reputation in the underground of House. Whether its tough funky rhythms or his deeper, more techno work, Daneeka has maintained a strong thread of warmth and soul to his music.

With releases on major labels such as Berlins 50Weapons, Midnight Visions and his very own Ten Thousand Yen it is safe to say that Doc Daneeka is rapidly becoming a big name in the UK House and Techno scene.

Check out the line up for the night on Facebook event.

If you’re looking for a cool party with a good atmosphere to go and dance to this weekend, Yamamori Tengu is a great option for you. This Saturday they will be host to the first Telephones party of the year.

Telephones is organized by the lads behind Discotekken and The Locals!

KALEO Live – At The Olympia Theatre 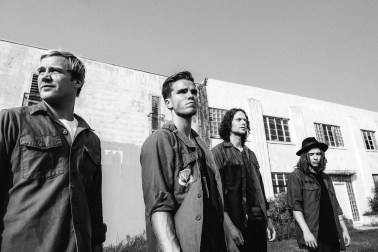 The Icelandic band Kaleo will be playing their biggest headline show to date in Dublin’s Olympia Theatre on Monday.

“The Handprint Tour,” Kaleo’s current headline tour includes a sold out show at Dublin’s Academy on November 20th. This time is no different, the tickets are gone but there should be a few on resale if you really want to see the band!

Frightened Rabbit – At The Academy 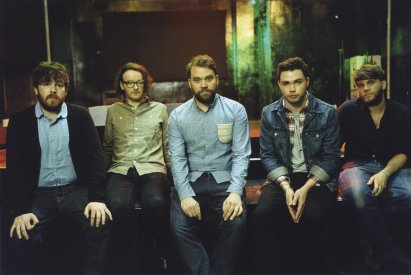 The Scottish band Frightened Rabbit will perform in Dublin this weekend. The indie rock act have sold out venues right across the UK and are very excited to be coming play for us in Ireland. The band is promoting their album ‘Painting of a Panic Attack,’ which reached the Top 20 in the UK album charts in April last year.

Check out some of the band’s tunes here! 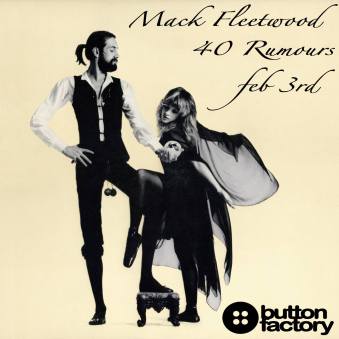 Hey fans of Fleetwood Mac, how about celebrating 40 years since the release of the band’s iconic album “Rumours”? with lyrics on the big screen. Join Mack Fleetwood for a 2 and a half hour set and sing along to some of your favorite tracks from the album. “Go Your Own Way”, “Dreams”, “Don’t Stop” to name a few.

Sounds good? So head down to The Button Factory this Friday and enjoy! 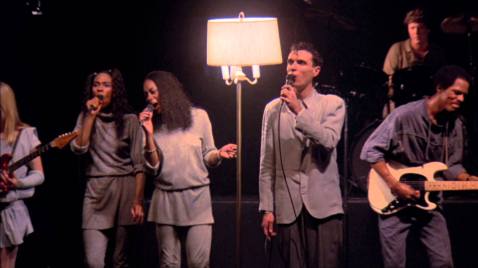 The best venue in the land to check out one of the most iconic concert movies of all time, Stop Making Sense.

Director Jonathan Demme captures the frantic energy and artsy groove of Talking Heads in this concert movie shot at the Hollywood Pantages Theatre in 1983. The band’s frontman, David Byrne, first appears on an empty stage, armed with only an acoustic guitar, and is gradually joined by bassist Tina Weymouth, drummer Chris Frantz, keyboardist Jerry Harrison and a cadre of backup singers as they perform the band’s hits, culminating in an iconic performance featuring Byrne in an enormous suit. 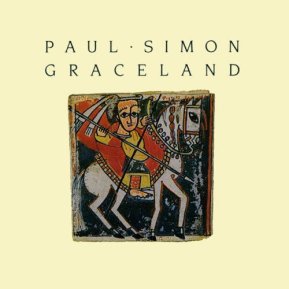 Vinyl & Wine will be playing Paul Simon’s ‘Graceland’ on a Cloney Sound system, along with a panel discussion at The Liquor Rooms this Sunday.

Graceland is the seventh solo studio album by American singer-songwriter Paul Simon. Recorded in 1985 and 1986, Graceland features an eclectic mixture of musical styles, including pop, rock, a cappella, zydeco, isicathamiya, and mbaqanga. Simon created new compositions inspired by the recordings made in Johannesburg, collaborating with both African and American artists. Simon faced controversy for seemingly breaking the cultural boycott imposed by the rest of the world against South Africa because of its policy of apartheid. In addition, some critics viewed Graceland as an exploitive appropriation of their culture. Following its completion, Simon toured alongside South African musicians, combining the music of Graceland and their own music.

Do you ever wonder where to enjoy some Blues music in Dublin? This Friday the Arthur’s Music Venue is hosting a Blues night with Gerry Hendick (Guitar and Vocals), Noel Bridgeman (Drums and Vocals) and John Querney (Bass and Vocals).

The Bionic Rats – At Grand Social 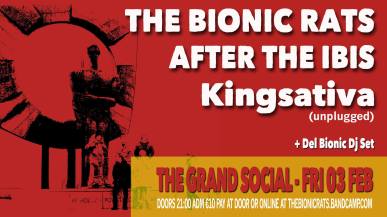 The Bionic Rats bring their upbeat blend of ska, reggae & 2tone to The Grand Social this Friday. Joining them on the night are reggae rockers After The Ibis playing some new tracks alongside tracks from their classic album ‘Busy Waiting’. A special treat for Dublin sees the long awaited return to the stage (albiet a stripped down version) of reggae veterans Kingsativa doing a short unplugged set of tracks from their two seminal albums. Get there early to catch their set.

A company of seasoned classical actors embrace the brutality of the greatest play ever written. A gripping, ensemble style brings exhilaration and violence to the unforgettable music and delicacy of the words.

The King of Denmark is dead. Consumed with grief, Prince Hamlet devotes himself to avenging his father’s death with devastating consequences for his family and the Kingdom. The spirit of a murdered king, the wrath of a vengeful son, and the turmoil of Denmark in 1601. Shakespeare’s most iconic and challenging play tells the tale of young Prince Hamlet avenging his father’s death and fighting the new King who stole his throne.

Blending traditional and physical theatre with a musical score, this muscular production brings to life some of literature’s most vibrant language and characters in a way you’ve never seen before: bold, exciting, and action-packed.

The Pillowman – At The Gaiety Theatre

The Pillowman, winner of two Tony Awards and Olivier Award for Best New Play, engages the audience through the police interrogation of a young writer and the fantastical tales he creates. The uneasy laughter provoked by McDonagh’s gift for comedy never overrides the emotions of fear and pity felt for the young writer’s plight. McDonagh’s storytelling skill, combined with the Decadent’s stellar cast and creative team, will keep the audience on the edge of their seat to the very last line.

The Pillowman features the wonderful dramatic talents of Peter Gowen as Tupolski, Diarmuid Noyes as Katurian, Owen Sharpe as Michal, and Gary Lydon who reprises his critically acclaimed role as Ariel.

This Sunday The Light House Cinema will be screening the Swan Lake performed by Bolshoi Ballet, recorded live in Moscow.

A ballet of ultimate beauty and a score of unparalleled perfection born at the Bolshoi in 1877. In the dual role of white swan Odette and her rival black swan Odile, prima ballerina Svetlana Zakharova exudes vulnerability and cunning through superb technical mastery, alongside the powerful and emotional Siegfried, Denis Rodkin. Including breathtaking scenes with the Bolshoi’s corps de ballet, this is classical ballet at its finest. Captured live on 25 January 2015.

Established in 2008, the Dublin Chinese New Year Festival (DCNYF) year-on-year celebrates, promotes and deepens the understanding of the Sino/Irish relationship.  2017 will celebrate The Year of the Rooster and marks the 10th year of this internationally recognised festival. With Chinese New Year’s Day falling on Saturday 28th of January 2017 the festival plans to deliver a high profile cultural and celebratory programme to mark this significant date in the Chinese Calendar. Dublin will also continue to build on its twinning agreement with Beijing signed in 2011 and Dublin Airport Authority twinning with Beijing Airport established in 2013.

Check out the Festival Full programme

Rise and shine for the Year of the Rooster! Dublin Chinese New Year Festival presents a feast for the senses at The chq Building.

Rooster-themed entertainment, activities, arts and crafts, suitable for people of all ages. Come try your hand at Chinese chess and calligraphy, marvel at martial arts displays and musical performances, or sample the delicious Chinese food and drink on offer at our Spring Festival stalls.

The Fabulous Market is coming back to the George Bar on Saturday, from 12:00 pm. This is a a really quaint market, not too big, but charming and with interesting stuff. You will find things like fashion, home decor, vintage, jewelry, arts. The bar will be open and there will be music as well.

HAVE A FAB WEEKEND!