Wanna know what’s on in town this weekend? Check this out!

This Friday the amazing and Awards winner DJ Sven Väth will be playing the best of his electronic music in a 4 hour set at The Wright Venue.

The German Dj/producer’s career in electronic music spans well over 30 years. His single, “Electrica Salsa” launched his career in 1986. Lovingly referred to as “Papa Sven” by his fans, Sven Väth has made his mark on the music community by being one of Germany’s “pop stars” in the nineties, running two famous night clubs in Germany, and starting his own company Cocoon. He is recognized for cultivating the underground electronic music scene not just in Germany but in Ibiza as well, with his own night at Amnesia for fourteen years and after-parties at creative locations around the island. Sven Väth is a major proponent of vinyl, using only two decks and a mixer for his extensive DJ sets, his longest set having been 30 hours.

Get ready to lose yourself to dance! Expect full techno AV and 3D laser show.

How about kicking off your weekend with Joseph Capriati playing some techno music for you? He will be at District 8 this Friday!

Now recognized as one of the principal profiles in techno, Joseph Capriati has established a reputation as a universally popular and in-demand talent. A naturally charismatic DJ with a back catalogue of standout productions, Joseph is an instinctive performer with a genuine enthusiasm for entertaining.

A Celebration of Prince – At the Grand Social

This is a celebration of the incredible legacy of Prince Rogers Nelson with a 3 room Purple Playground of musical treats. Confirmed so far are Kelly Anne Byrne & Nialler 9 on the decks and a kick ass sexymotherfunking live band featuring Dennis Cassidy (Mixtapes From The Underground) Danny Groenland, Keith Fennell, Sara Golding and more.

One of Ireland’s most respected broadcasters and DJs will perform a very special show at District 8 this Saturday.

Jenny Greene will be following on from her sellout show at the 3 Arena and a fantastic Electric Picnic performance with the RTE Concert Orchestra.

Lumo returns to Tengu with a Spring in its step this Saturday. Alongside the Lumo Club residents, they will be hosting the launch of the ‘045 One’ Compilation from 045 Recordings with all the acts on the roster playing live in Ping Pong.

Lumo is a club for dancing featuring a great sound system, a decent bar and DJs in the corner playing classics and curve balls.

It’s one year since the Purple One departed this mortal land but on Friday The Bernard Shaw are bringing the spirit of the man back.

They will have a screening of Purple Rain from 6pm followed by a very special Prince A/V set by 2017 Choice Prize nominee Bantum. He’ll be accompanied by visual artist LeTissier for this show which has previously featured at Electric Picnic, Body&Soul and beyond. They’ll have plenty of suitably funky tunes throughout the night to keep you going till the wee hours.

The time has come for the annual Record Spot/R.A.G.E Throwdown as they host the biggest RSD event in the city! They’ll be showcasing some our favourite local bands and DJ’s, plus the usual excellent giveaways and killer RSD exclusives.

This is a free, family friendly event, so everyone and anyone is welcome to attend!

If you’re a big fan of grunge then you can’t miss The Seattle Grunge Experience at the Button Factory this Saturday. This event is the ultimate live tribute to the Seattle Grunge scene, playing the music of Nirvana, Soundgarden, Pearl Jam, Alice In Chains and more.

Hey fans of Prince! The Sugar Club is hosting a celebration of the artist and his music this Friday.

They will dedicate this night to Prince by having a special screening of Sign of The Times, edits of his videos, DJs spinning your favourite Purple jams and even signature cocktails for the night. Please wear some purple to honour one of the greatest artists of our generation.

Sign O The Times featuring the band that accompanied Prince on his 1987 Sign o’ the Times Tour, including dancer Cat Glover, keyboardist Boni Boyer, bassist Levi Seacer, Jr., guitarist Miko Weaver, drummer Sheila E. and former member of The Revolution keyboardist Dr. Fink, the film sees the group perform live on stage (although “U Got the Look” is represented by its promotional music video).

Repeal- A Night In The Key of 8

A number of musicians and artists are lending their voice to support Repeal the 8th. Take part in this special fundraiser.

More to be announced but acts include: 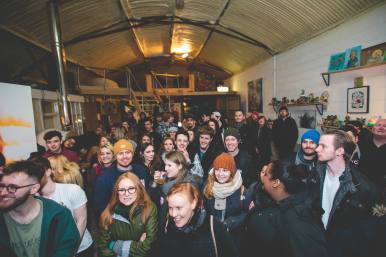 Deliveroo are celebrating their two year Irish anniversary by inviting you to join us for a FREE Live Art Battle at All Out Design!

Two artists will go head-to-head in front of a live audience with limited time and materials to create their very best piece of art. A theme is chosen by the public pre-event and the winner is decided by crowd vote on the day.

They’ll also have a mini exhibition space set up so you can get hands on with the artists’ sketchbooks to gain an insight into how they create their works.

If that wasn’t enough, the magician, Steve Spade, will be having a very special performance on the day.

You must register here for a ticket to gain entry

All Out Design – 1A Hyacinth Street, North Strand, Dublin

Travel back in time to the heyday of the Berlin cabaret scene for an evening of classic cabaret, aerial dancing, burlesque and dance ensembles set to a soundtrack of hot jazz, cabaret solos and modern-era songs with a bygone-era twist. This is cabaret in the truest sense of the word – tongue-in-cheek, provocative, hilarious and pure entertainment.

Sunday is the day to ‘Experience Japan’ right here in Dublin! Head down to Farmleigh House and Gardens in the Phoenix Park to enjoy Japanese music, dance, food, martial arts demonstrations and crafts.

Check out www.experiencejapan.ie for line up and location details.

Up for more laughter this weekend? Check this out! Ireland’s top comedy sketch group Foil Arms and Hog will be performing at Vicar Street this Sunday.

The Irish sketch group formed by Sean Finegan, Conor McKenna and Sean Flanagan perform on TV, radio, the stage and YouTube. They work out of an office in Dublin where they write, film and edit their own sketches for their YouTube channel. They do a new video every Thursday, sometimes topical, but mostly completely random. Some of their more successful sketches are ‘How to Speak Dublin‘, ‘A Kerryman gives Directions‘ and ‘The Ryanair Song’.
They met each other at University, formed the group and have been touring their live shows in Ireland, the UK, the US and Australia over the last eight years to audience and critical acclaim.

If you don’t know these guys yet then check out their YouTube channel here!

The John Carpenter’s original 1980 chiller, The Fog, will be shown at Lighthouse Cinema this Friday.

From The Master of Horror, John Carpenter (The Thing), comes this chilling tale of terror starring Adrienne Barbeau (Escape From New York) and scream queen legend Jamie Lee Curtis (Halloween). The village of Antonio Bay has held a dreadful secret involving greed and murder for over 100 years. Now, on the anniversary of that same event, something has returned to seek vengeance on the community… and it lurks in The Fog!

The Fog will be shown at Lighthouse Cinema, Smithfield on Friday September 23rdst at 10.30pm!

The April’s fair in Dublin

Once again the Spanish Corner in Dublin brings you “The April’s fair” with all the art and taste of the Andalusian “fiesta”, where you will enjoy flamenco shows, live bands, drinks and Spanish Gastronomy all at Spanish prices!

Have you been to the Eatyard Food Market yet? The Eatyard is an excellent food market right next door to The Bernard Shaw. Eatyard’s aim is to elevate Irish Street Food to a new level and bring a unique casual dining experience to Dublin.

Get some yummy food there this weekend and stop by The Bernard Shaw for some drinks and music!

HAVE A WEEKEND WITH LOTS OF FUN!